Goal: Provide our citizens with the knowledge, skills, and motivation to make responsible choices that benefit our coastal environment. 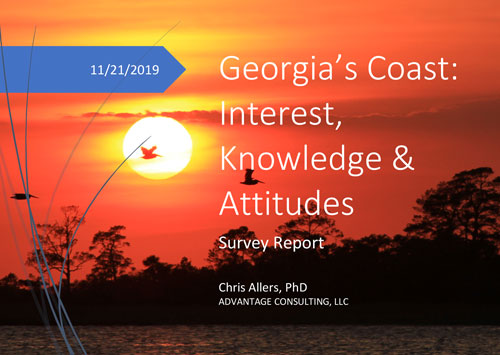 The Georgia’s Coast: Interest, Knowledge and Attitudes survey had a completion rate of 76% and an average response time of 16 minutes. The survey included incentives (raffle prizes and $5 donation made to an environmental organization) for completion. Invitations to participate were primarily sent through organizations that had an environmental focus but appeals to participants were also made to the larger public through media releases.

For the purposes of this report, the following categories were used to evaluate differences.

Online surveys have distinctive features related to design, distribution and evaluation of data. Relevance of the survey topic has been shown to influence response rates (Groves et al, 2000), as has survey fatigue (Liu & Wronski, 2017; Porter, 2004b; Saxon et al, 2003), and even such factors as the focus of the study, the methods of contact, the methods of data collection, and the wording of the questionnaire title (Crawford, McCabe, & Pope, 2005; Dillman, 2000; Dillman & Frey, 1974; Dillman, & Smyth, 2007; Goyder, 1987; Hox & Deleeuw, 1994; Lund & Gram, 1998; Miller, 1991). Fan and Yan (2010) established five survey delivery elements affecting survey response rate. These elements are sample, delivery mode, invitation design, the use of pre-notification and reminders, and the use of incentives.

Another influencer is that participants may not respond to questions accurately if they believe that their answer is not socially desirable (Crowne and Marlowe 1960; Silver, Anderson, and Abramson 1986). Also, progressive leaning respondents are much more likely to participate than conservatives and individuals from smaller households are more likely to participate than those from larger ones (Hargittai & Karaoglu, 2018).

The typical respondent to this online survey was a white, older female, living in one of Georgia’s largest urban coastal communities with advanced education and moderate to progressive political leanings. Respondents were more likely to be from a household without children and with an annual household income above $60,000.  While these attributes are not reflective of the entire population of the state of Georgia, they do closely mirror the population that participates in online surveys. This is especially true considering the focus being on interests, attitudes and knowledge regarding Georgia’s coast.

Protect, connect, and enhance environments for coastal plants and animals to adapt to changes in sea level and benefit the community.

Maintain thriving, working landscapes and waterfronts that support the sustainable production of food and fiber for our communities.

Cultivate opportunities to enjoy and recreate in the special places and historic communities along Georgia’s coast.

Promote economic development that respects natural environments and preserves the character of our coastal communities.